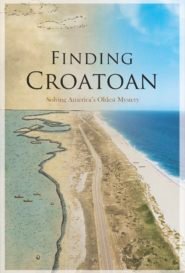 Finding Croatoan follows the story of Scott Dawson, a native of Hatteras Island in North Carolina, a man of Croatoan heritage that is searching for the evidence that will prove the whereabouts of the infamous “Lost Colony” of Roanoke Island.

As a child, Scott was enamored with the local lore and breadth of historical significance the “Outer Banks” of NC possessed. He spent his days digging in the dirt unearthing countless pieces of Native American pottery and other artifacts. This love of history and archaeology continued into adulthood, but what really hooked his attention was the tale of the “Lost Colony,” an American history mystery that took place right in his backyard – just 400 years earlier.

It didn’t take long for him to gain the attention of professor from England’s University of Bristol.  Dr. Mark Horton, an acclaimed archaeologist and TV personality took the trip across the pond in 2009 and, impressed with their initial findings, brought a team bag to dig in 2011 (and every year since).

Working alongside Dawson’s Croatoan Archaeological Society, the team has been covered by major publications like National Geographic, History Channel, Travel Channel, and more. Because they haven’t published their findings yet, most people don’t know about what CAS has accomplished. But now, they are ready to share it with the world.